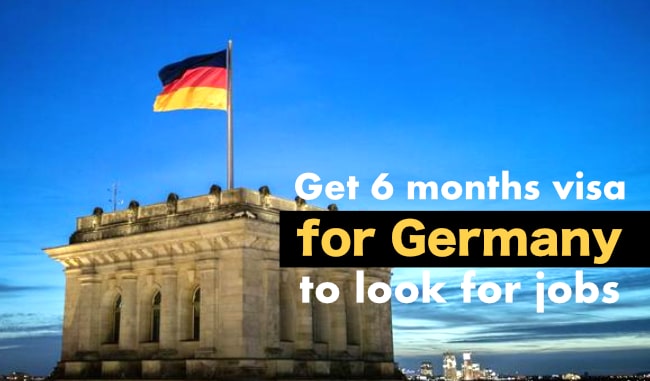 by the team of Road to Abroad

Non-EU nationals wishing to work in Germany will now be subject to easier procedures and facilitated rules due to the new German Skilled Immigration Act, which has taken effect on March 2, 2020.

The new regulation, which among others makes it possible to gain employment in Germany even in jobs that could be filled by Germans or EU nationals, and permits foreigners to come to Germany for up to half a year to seek work, intends to provide easier access to the German labour market for qualified workers from non-EU countries.

It also aims to increase the numbers of the workforce in Germany, as many positions remain vacant due to lack of skills and workers. Below, we have listed and explained the main changes to the rules related to working in Germany as a qualified non-EU national.

Qualified Professionals According to the New Law

The newly implemented law has expanded the list of those that are now considered as qualified professionals for moving to Germany for work. Under the new law, in addition to those with a tertiary education degree, non-EU nationals holding a vocational training qualification, obtained after a training course that lasted at least two years, are also considered as qualified professionals, and as such are eligible to seek for work in Germany.

In addition, the worker must meet the following conditions in order to be able to legally work in Germany:

Moreover, the new rules expand the fields of employment for foreign workers, permitting them to work in an occupation related to their profession that is not necessarily their field of study. They can also work in jobs for which a tertiary education degree is not compulsory (qualified professionals with academic degrees only), as well as in other professions related to their qualification, for which a vocational, non-academic qualification is usually required, excluding auxiliary and semi-skilled occupations.

As per qualified professionals with vocational qualifications, i.e. non-academic training, their employment is no longer restricted to occupations for which there is a lack of skilled EU nationals.

Six-Month Visas to Search for Work in Germany

Moving to Germany for a maximum of six months to seek for a job is now possible for non-EU nationals that have their qualifications recognized by the relevant body in Germany.

Foreign workers that have enough funds to support themselves for the duration of their stay and German knowledge of at least B1 level of the Common European Framework of Reference for Languages can apply for Germany Jobseeker Visa.

The visa permits its holder to work for a maximum of 10 hours within a week, so a potential he/she and their potential employer can find out if they are suited to each other.

Training and Skill Development in Germany

Persons who required from a relevant body in Germany to undertake the recognition procedure whilst abroad, and they received a negative answer that their qualification does not completely meet the requirements of a German qualification now have a choice.

They can come to Germany with a visa for Training and Skill Development, under the condition that they have the necessary German language skills, A2 level according to the Common European Framework of Reference for Languages.

Coming to Germany as a Trainee

Non-EU students younger than 25, with a B2 level of German language knowledge and the ability to financially support themselves can seek a training place in Germany due to the new rules.

With a residence permit for a vocational training course, a foreigner can also attend a German language course, either general or occupation-related.

Students in Germany wishing to switch their residence status, have the chance to do so easier than before.

Or they can get a job as a qualified professional whilst still studying or receiving vocational training (under certain preconditions).

As per foreigners who have successfully completed a vocational training course in Germany, they can apply to receive a permanent settlement permit upon a period of two years in the country, the same period as applies to graduates.

Companies hiring workers outside the EU can now follow facilitated procedures and rules after the new law came into effect on Monday. The facilitations created include expedited procedures for qualified professionals through the relevant foreigner’s registration office in Germany.

Firstly, the hiring company and the foreigner’s registration office reach an agreement. This agreement must include the procedures, parties, deadlines, and powers of attorney. It should also state the obligations for the employer, the qualified professional and the relevant authorities.

Secondly, the foreigner’s registration office gets the approval of the Federal Employment Agency, within certain deadlines.

The office then issues to the employer an advance approval if all conditions are met. The employer then passes approval on to the qualified professional.

The qualified person shall then follow the procedures for getting an employment visa for Germany from their country of residence.

Athletes and coaches of esports can also apply for a visa, according to the new rules, which visa will permit them to come to Germany and obtain residence permits for employment.

The approval of the German Federal Employment Agency will not be required in this case either. Applicants will need to meet several conditions, as they must be above 16 and have a salary of at least 50 per cent of the income threshold of the statutory pension insurance.

In addition, the German Sports Federation and the responsible central association for the sport, by mutual agreement confirm the athlete’s athletic qualification or the coach’s professional competence.

After reading this article, you must have gained a lot of clarification about German Job Seeker Visa and other updates. If you have any doubts, contact our team. We will be happy to help you.

Check out Our Services >>

Thank you for this informative article. I have been looking for this on internet for last 2 hours but no article could answer all my doubts. I am happy I found this article 🙂

We post latest information related to studying abroad, IELTS exam preparation, Immigration rules and regulations, Canada Permanent Residency (PR) and so on. If you want us to update you on latest developments, subscribe our newsletter now!