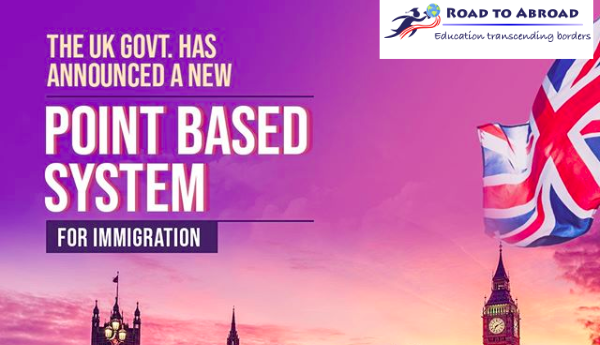 Under the new UK point based immigration system, EU migrants will be treated the same as those from the rest of the world including Indians.

What’s in the proposals?

The government wants a “points-based immigration system” which takes different factors like skills and language into account when awarding visas which would allow people to work in the UK.

In a policy statement being published on Wednesday 19 February, the government says that to get a visa, applicants from anywhere in the world must:

That will get an applicant to 50 points. But they must have 70 points to be eligible for a visa. The most straightforward route to the final 20 points is that the applicant will:

But they can also gain extra points for having better qualifications (10 points for a relevant PhD; or 20 points for a PhD in science, technology, engineering or maths) or an offer of a job in which the UK has a shortage (20 points), even if they don’t earn as much money. 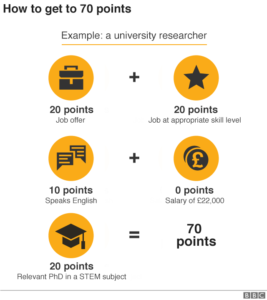 Currently, those from within the EU do not need a visa to work in the UK because they benefit from freedom of movement – although there are limits on claiming certain benefits.

For those from outside the EU, there is already a system in place based on points.

These points are already awarded for having English language skills, being sponsored by a company and meeting a salary threshold.

A maximum number of work visas are awarded – the cap is set at around 21,000 a year but it isn’t often met.

There are four “tiers” of visa assessed on points. There are a few other types of visa available, with different rules – for example, family visas for the spouses and relatives of people coming on work visas.

The four points-based visas are for:

Under the new system, the government will continue with a pilot scheme for seasonal agricultural workers. But it does not intend to introduce a general low-skilled or temporary work route.

Admissions to top universities in UK could be challenging as they witness a huge rush of students from all over the world. But you don’t need to worry when Road to Abroad has your application. Our experts have an impeccable record of helping students to make it to the top universities in the world. So, what are you waiting for? Book your 30-minutes free career counselling session now!

We post latest information related to studying abroad, IELTS exam preparation, Immigration rules and regulations, Canada Permanent Residency (PR) and so on. If you want us to update you on latest developments, subscribe our newsletter now!

What are you looking for?